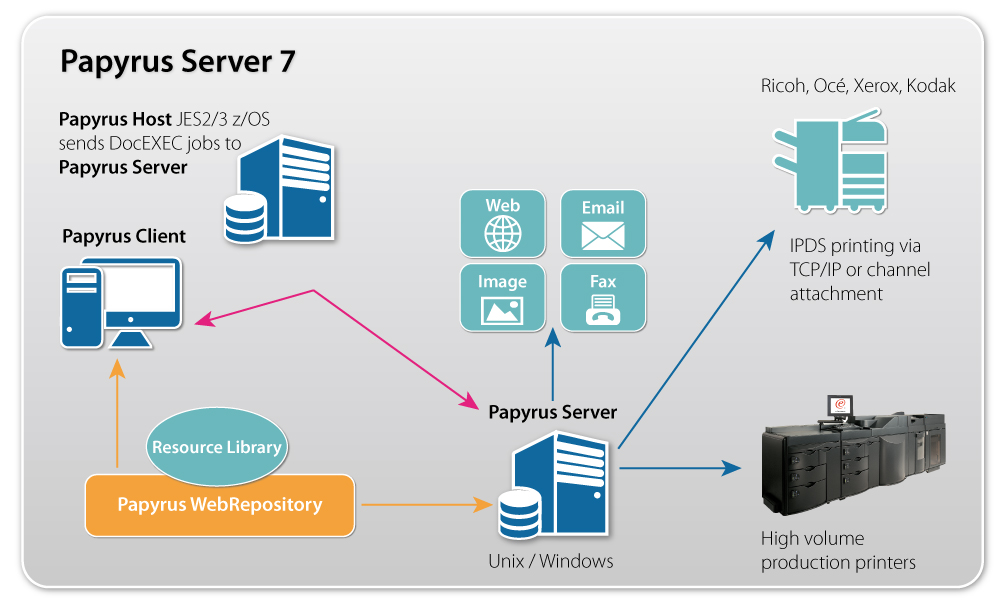 Papyrus Server is binary compatible to the print functions of IBM PSF for z/OS. It is not only a data stream converter, but can manage the complete print job including all the resources such as fonts, forms, embedded images and logos. Papyrus Server provides resource management, distributed printing to IPDS, IJPDS, PCL Xerox Metacode, Postscript, fax, email, PDF and TIFF as well as archive interfaces.

Papyrus Server supports the full range of IBM AFP formatting functions for text and graphics, which includes PAGEDEF and FORMDEF. It also provides all functions of the Papyrus DocEXEC formatting engine as an optionally integrated component.

Papyrus Server connects host systems via TCP/IP or SNA LU6.2 with applications under Windows, AIX and Solaris. It can receive output and AFP resources from JES2/3 or send output to the host over the network. Optionally, output data in ASCII or Xerox Metacode can be routed directly to the printer port. On other platforms, jobs can be received either via file transfer protocols or via TCP/IP.

Papyrus Server offers printing of all AFP applications in the network.

Papyrus Server/IPDS enables the use of IPDS compatible printers at any speed. With this server module, an unlimited number of printers can be controlled. Printers can be channel-attached or connected via TCP/IP.

The Papyrus Server/Postscript creates a Postscript file that can be printed on any PS-compatible printer.

The Papyrus Server/Metacode provides completely seamless conversion of AFP jobs to Xerox Metacode. No resources need to be generated as Papyrus Server converts and loads all fonts and forms on-the-fly.

Production printers can be channel-attached or connected via TCP/IP. Xerox output can be routed directly to the printer. Print speed depends on the complexity of the print job and the printer model used.

Supports creation of PDF/A based on PDF 1.7 and compliant with conformance levels PDF/A-1a, PDF/A-1b and PDF/A-2a.

Papyrus Server/HTML is used to convert AFP documents to HTML. The conversion is compliant with W3C standards and can produce full HTML for web browsers as well as simplified HTML for email clients.

Papyrus Server/PDF-in is used to perform conversion of PDF documents to AFP. It provides full control of resolution, resource handling and image representation as well as bookmark conversion and the creation of overlays.

The Papyrus Server/TIFF creates TIFF G3 or TIFF G4 files for each page of an AFP application with an index or a separate index file.

The Papyrus Server/Fax performs the conversion from AFP to Fax G3 format compliant to ITU-T Recommendation T4. The fax details are extracted from the AFP document and sent to a standard fax modem or ISDN fax service.

The Papyrus Server/E-Mail allows you to send different document formats as email attachments via the SMTP protocol to any mail server.

Papyrus WebControl optionally offers a graphical user interface for print, job, spool and queue management via any web browser or the Papyrus Desktop.  This includes user authorization based on roles and privileges for accessing the servers.